The X-Men may be known for protecting the world from mutant threats, but one of the team’s most famous villains and occasional members isn’t a mutant at all. The Juggernaut, Charles Xavier’s stepbrother Cain Marko, acquired his super-strength through mystical means. Still, the Gem of Cyttorak made him one of the strongest and deadliest forces in the Marvel Universe.

But just because the Juggernaut’s powers are magical doesn’t mean that they’re without explanation, and there’s actually a surprising amount of comic book super-science behind the gargantuan body of the unstoppable Marvel villain.

Due to his personal connection to the X-Men’s founder Charles Xavier, it’s easy to assume that Juggernaut is simply a mutant. After all, Stan Lee first developed the idea for mutant powers as an easy way to dispense with lengthy origin stories to explain so many different powers, but even as early as Juggernaut’s first appearance in X-Men #12, Lee and Jack Kirby detailed the Juggernaut’s mystical origins.


RELATED: Marvel Just Unleashed a Juggernaut Army – and Dropped It on the Avengers

While serving alongside his stepbrother in the Korean War, Cain Marko entered a lost temple where he discovered the Crimson Gem of Cyttorak. Though the temple collapsed around him and Xavier thought him dead, the Gem actually imbued Marko with phenomenal power as the avatar of the dark otherworldly god Cyttorak. This meant that many of the technologies that could work on mutants — such as power dampening collars and Sentinel tracking device — simply had no effect on Juggernaut. It also massively increased his human body to Hulk-like proportions, making him roughly 9.5 ft. tall and weighing slightly under two tons.


Due to the mystical enchantments of the Gem of Cyttorak, the Juggernaut is physically unstoppable once he starts building up momentum. Once he sets himself in motion, he can pummel through anything in his path while running at speeds in excess of 600 miles per hour. His immense strength and unending invulnerability make him a big enough threat even when he’s not in motion, but this is the true power of the Juggernaut.

To make matters even more difficult for anyone trying to stop Juggernaut, he’s made all the more invulnerable by the ability to produce a powerful force field around his body. The aura has even resisted the power of  Thor and Mjolnir with its own dark enchantments. All of this works together to make the Juggernaut almost impossible to stop through any kind of physical means.


Though Juggernaut’s power does seem unending, his body only acts as a conduit for energies from Cyttorak. If the nigh-omnipotent being decides to cut Juggernaut off, he can reduce the flow of power to a fraction of its former strength, and Marko has had to get by with scraps of power that pales in comparison to what he is used to more than once. Cyttorak is a jealous and focused god of destruction, and he punished Marko whenever he accepted power from other beings or wielded those powers in the name of preservation rather than destruction.

Despite that, Cyttorak’s powers rarely leave Juggernaut’s body in their entirety. Even when Marko is cut off he often retains a still impressive degree of super strength and invulnerability, and he’s certainly got more than enough power to deal with most threats in a weakened state, even if he just can’t take down a Hulk. Conversely, the Juggernaut is strong enough to smash through the walls of reality itself as the Trion Juggernaut.


To truly be unstoppable, the Juggernaut needs enough power to keep on going ad infinitum. For Juggernaut, his ceaseless reservoir of mystical energy serves as that power, and that means that he does not need sustenance in order to fuel himself or even survive.

Juggernaut has gone weeks and even months without eating, sleeping or even breathing. In The Amazing Spider-Man #230, Juggernaut once famously fended off the raging supervillain by tricking him into a pool of wet cement he slowly sank into. While Juggernaut could not get leverage to free himself, he simply sat in waiting until the opportunity to escape presented itself much later on. 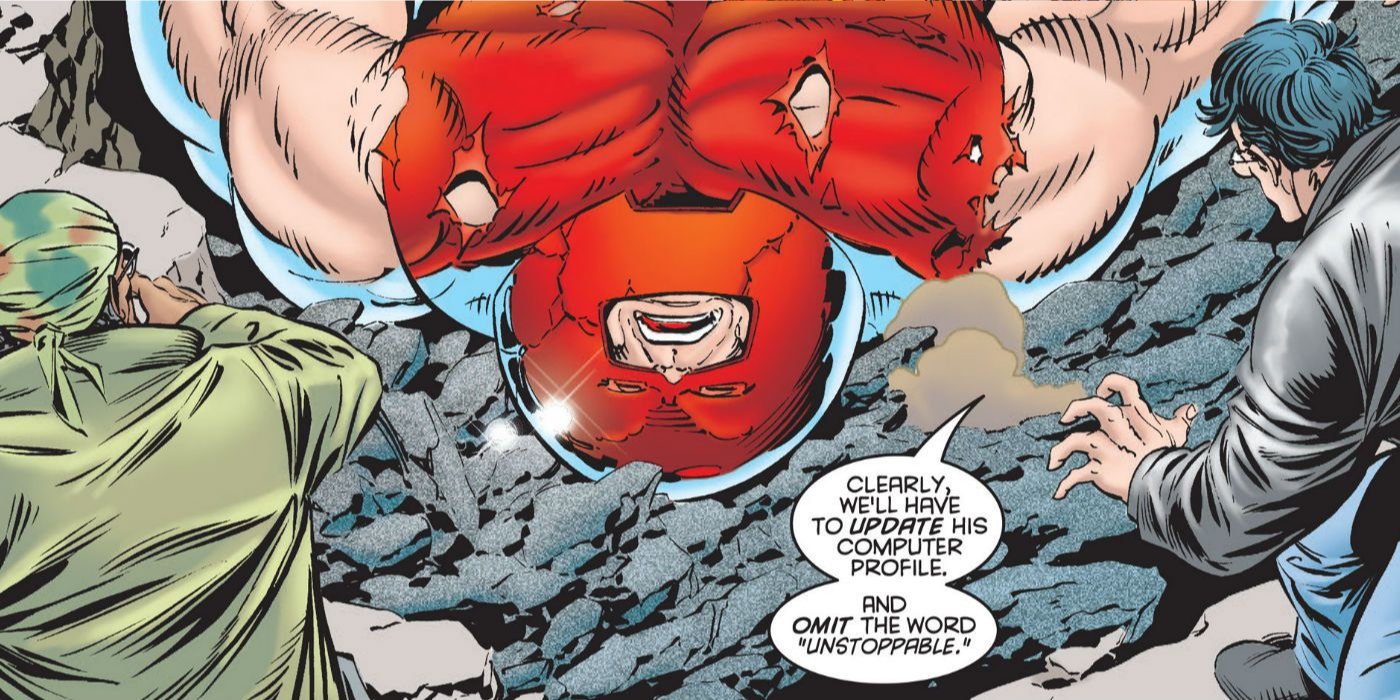 Even if Juggernaut is famously “unstoppable,” that doesn’t mean he can’t ever be stopped. Over the years, the most tried and true method of putting Marko down is to hit him with a psychic blast strong enough to KO him directly, bypassing all of his physical defenses and attacking his mental ones instead. The easiest way to do that is to take off his helmet, which serves as a magical armor that protects from telepathic intrusions. But even beyond that, Juggernaut has psychic defenses of his own, and it takes a formidable telepath like Xavier or Jean Grey to break them down.

As the X-Men know all too well, the goal to putting Juggernaut down usually involves most of the team trying to tear off Juggernaut’s helmet while Xavier or another telepath breaks down his mental barriers. Over time, this has gotten harder, and Juggernaut has learned to guard against this particular form of attack. While the Juggernaut might be one of Marvel’s most physically imposing villains, this goes to show that even characters with extraordinary amounts of power have their limits.


About The Author
Brenton somehow earned a college degree in the middle of a multi-decade pop culture binge he continues to this day. His interests range across philosophy, literature, and the arts to comics, cartoons, television, and Dungeons & Dragons.

Follow him on Twitter @BrentonStewart6 or reach out by e-mail at [email protected] if you have nice things to say!
More From Brenton Stewart